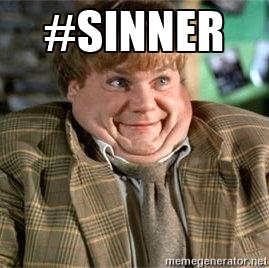 One of the key stops on the Romans’ Road to salvation is Romans 3:23.  Stop me if you’ve heard it from an evangelical friend of yours.  “All have sinned and fall short of the glory of God.”  Or, perhaps you haven’t walked that path before; maybe you’ve spent your whole life in Mainline Protestantism.  If that’s the case, then you are likely familiar with the idea of corporate confession.  In the Episcopal Church, on most Sunday mornings, it sounds something like, “Most merciful God, we confess that we have sinned against you in thought, word, and deed, by what we have done, and by what we have left undone…”  Thanks in large part of the Protestant Reofrmation, modern American Christianity seems fairly comfortable with the idea that we are all fallen, sinful people.

This is a very healthy way of understanding our place in God’s plan of salvation, but it can prove very unhelpful when the calendar rolls over to Proper 19 in Year C and the word “sinner” takes a prominent roll in both New Testament lessons.  It wasn’t until I started reading my usual commentaries on this week’s lesson in preparation for preaching that  realized that when Paul talks about Jesus coming to save sinners and the Pharisees grumble about his welcoming and, worse yet, eating with sinners, they don’t mean sinners in the universal sense.  Instead, there is a very particular meaning for that word.  This was something of a theme in the commentaries I read last night, but I’ll randomly choose Greg Carey of Lancaster Theological Seminary’s explanation.

“Congregations may stumble over the term sinner, especially if they are well educated in Christian doctrine. “Aren’t we all sinners?” some may protest. Not in Luke’s world. In Luke’s world, some people so habitually transgress the ways of God that they are sinners in need of repentance. Others do not. We must take our passage on its own terms: Jesus distinguishes between sinners who repent and “the righteous who have no need of repentance” (15:7). We may struggle with that distinction, but it is critical for engaging this passage on its own terms. Here lies the cutting edge of the passage: Jesus embraces the very people the rest of religious society rejects.”

Jesus isn’t hanging out with folks who curse occasionally or honk their horn at slow old people in traffic.  Jesus is hanging out with the prostitutes, the drug addicts, thieves, and gangsters.  To put into a modern context, the optics of Jesus’ dinner guests would be like dining with Kim Jong-un, Anthony Weiner, and Bernie Madoff.  Not that it wouldn’t make for interesting dinner conversation, but polite society would frown upon having these men in one’s company.

The crux of the issue for the religious powers-that-be isn’t what Jesus is saying, but to whom he is saying it.  If God was offering even those notoriously sinful and unclean persons forgiveness, then the cultic system they have so carefully created no longer works.  If Jesus Christ came into the world to save sinners, then the world is going to get turned upside down.  Sure, there is the side benefit of Jesus saving us run-of-the-mill sinners as well, but when Jesus is sharing the Good News with the least worthy of it, that can be hard to swallow.