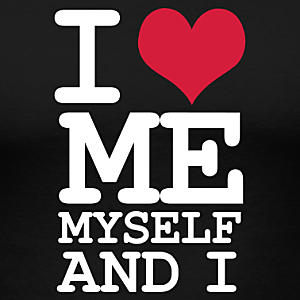 Greed is inherently selfish.  My insatiable desire for money and things and the power that goes with them is predicated on the fact that I can not care about the needs and sufferings of anyone else.  In Sunday’s Gospel lesson, it seems that it is the wonted selfishness of the Greedy Foolish Rich Man that is at the core of Jesus’ parable.

Commentary after commentary this week is highlighting the first person pronouns at work in Sunday’s Gospel lesson.  After Jesus begins the parable by clearly stating that the land, and not the man, had produced abundantly, he goes on to put first person pronouns in the mouth of the rich fool no less than twelve times!

My crops… My barns… My goods… My soul

This rich man’s sin ins’t that he was greedy, but that he failed to take notice that the abundant harvest was first and foremost the work of the God who created all things.  Beyond that, he also failed to see acknowledge that those crops might be better put to use in caring for the poor and needy who were no doubt in his view.  He certainly didn’t harvest all that produce by himself.  He didn’t build his own barns.  He didn’t pickle his own okra.  All around him were servants and craftsmen, those made by God in God’s image and likeness, who helped make his crops flourish, who helped build his system of storage, who helped ensure that his food would not spoil, but there is no reference to the existence of anyone other than himself.

I will… relax, eat, drink, and be merry

When we lose sight of our neighbor, we fail to live into the fullness of God’s dream for us.  “It is not good for man to be alone.”  In Genesis, these are the first words of God about something that is not good.  Isolation, being out of relationship with those around us, is not good, and selfish desire is a key cause of isolation.  When my focus is on the trinity of me, myself, and I, we are no longer in relationship with the Trinity of Love that is Father, Son, and Holy Spirit.

As the American Dream has evolved, selfish desire has become a foundational component.  We have made all of life a zero sum game, assuming that for others to have more, I would have less.  In God’s economy, it just doesn’t work that way.  Instead, when I give something away, I find myself richer than I could have ever imagined.