I wasn’t born under the stark regime of the 1928 Book of Common Prayer, so I don’t have that nagging desire to keep odd things from it like the falsely named “Installation of a Rector” which is really called “An Office of Institution of Ministers into Parishes or Churches.”  I’m not overly fond of the latent sexism in Rite I language, though I do think that the penitential tone of Cranmer’s Eucharistic rites are worth hearing from time to time.  I do, however, have one bit of the “old Prayer Book” that I wish the church would have held on to.  The 1979 Book of Common Prayer removed my favorite offertory sentence from its suggested list.  In the 1928 Book, after this great rubric: “Then followeth the Sermon.  After which, the Priest, when there is a Communion, shall return to the Holy Table, and begin the Offertory, saying one of these Sentences following as he thinketh most convenient” comes a list of no less than 16 choices.  Second on that list, having survived since Cranmer’s first Book in 1549, comes words from Jesus recorded in Matthew 5, “Let your light so shine before [others], that they may see your good works, and glorify your Father [who] is in heaven.” 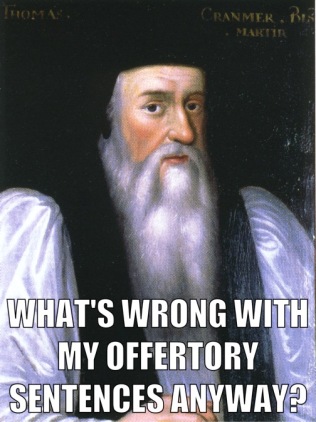 I love that Offertory Sentence, and have used it all through Epiphany season, but as the calendar moves to Lent, it is time to pick another one, and I’m thinking about going beyond the suggestions of the Prayer Book again, this time from Deuteronomy.  In Sunday’s Old Testament lesson, we hear what sort of Offertory Sentences the Lord requires of those who are entering the Promised Land.  Ignoring the potential for a killer stewardship sermon for the time being, what we hear is the rehearsing of salvation history, and a reminder that everything we have is a gift from God.  It might be a bit long to memorize, and tough to turn into a second person directive, but these words are so very important as we enter the Season of Lent and take stock of the ways in which we have fallen short of God’s dream for us.

When the priest takes the basket from your hand and sets it down before the altar of the Lord your God, you shall make this response before the Lord your God: “A wandering Aramean was my ancestor; he went down into Egypt and lived there as an alien, few in number, and there he became a great nation, mighty and populous. When the Egyptians treated us harshly and afflicted us, by imposing hard labor on us, we cried to the Lord, the God of our ancestors; the Lord heard our voice and saw our affliction, our toil, and our oppression. The Lord brought us out of Egypt with a mighty hand and an outstretched arm, with a terrifying display of power, and with signs and wonders; and he brought us into this place and gave us this land, a land flowing with milk and honey. So now I bring the first of the fruit of the ground that you, O Lord, have given me.“

Let us with gladness bring before the Lord the first of the fruit of the everything that God has given us.