Advent is a season of anticipation.  It begins by inviting us, in the midst of decorating, shopping, and busyness, to make room for the second coming of Christ in power and glory to judge the world.  It seems a bit odd to start the season leading up to Christmas in that way, but it is the reality in which we live: somewhere between the Incarnation and the Eschaton.  As the weeks progress, the tone begins to change.  Our preparation isn’t as much for the Second Advent of Christ, but for the First.  John the Baptist cries out in the wilderness, “Prepare the way of the Lord,” and then, finally, we come to Advent 4, and thing for which I wait each year.  Sure, Christmas is the telos of Advent, but for me, the Magnificat, especially sung by the congregation to Betty Carr Pulkingham’s setting, is the highlight of the Advent Season.  With the help of the choir, the round/canon nature of the antiphon echoes to the heavens:

My soul proclaims the greatness of the Lord, my spirit rejoices in God my Savior; for he has looked with favor on his lowly servant.

On Monday, I noted that Elizabeth’s proclamation of Mary’s blessedness had built into it an awareness that the foundation of blessing is found in God speaking a word of favor upon the one who is being blessed.  As I spent some time looking into the Magnificat, I became aware that just as our blessedness is from God, so too is our blessing of God a gift from the same. 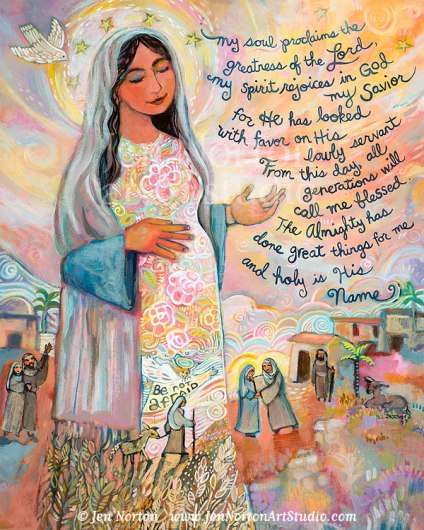 Mary cries out in exaltation that it is her soul that proclaims the greatness of the Lord.  That word, translated as soul, is psyche.  We’ve adopted it in English, to mean soul, mind, or spirit, but its original meaning takes us all the way back to Genesis 1-3.  The primary definition of psyche is breath.  It is the Greek equivalent of Hebrew’s ruah, the very breath of life given to each human in creation.  So it is that when Mary sings out the greatness of the Lord, it comes from that place deep within, her soul, her spirit, the core of her being.  It pours out from the breath that was given to her by God.

As disciples of Jesus, in the pattern of Mary, we share in that breath, and as we approach the annual remembrance of the coming of the Word made flesh, that same soul, breath, spirit, will rejoice in God our savior.

Many years later, as Jesus entered Jerusalem on a donkey to cries from the souls of the crowd of “Hosanna to the Son of David,” and “Blessed is the one who comes in the name of the Lord,” the Pharisees will rebuke Jesus and ask him to tell the crowd to stop proclaiming the greatness of the Lord.  In response, Jesus tells them that even if they were to be silenced, the stones would cry out instead.  It seems that there is no stopping creation, made by the breath and Word spoken, from proclaiming the greatness of the Lord. 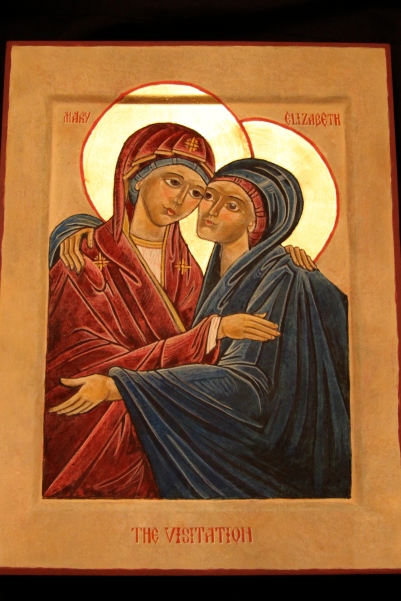 I wish there was a YouTube video I could share with you, but as of yet, there is not.  You’ll have to just trust me that the Betty Carr Pulkingham setting of the Mary’s Magnificat is legit and that if your congregation isn’t singing Mary’s Song this week, your worship will be sorely lacking.  If you have a hymnal handy, you should pull it out and open it to S247.  If you do, you’ll not that Pulkingham uses the opening verse of Mary’s famous hymn of joyful hope as an antiphon, which is just a fancy church word for a refrain.  It is set as a canon in two parts.  The way the setting is written, there is a certain highlight on the opening words of Mary in the ICET translation of the original Greek text.

My soul proclaims the greatness of the Lord, my spirit rejoices in God my Savior; for he has looked with favor on his lowly servant.

The focus of Pulkingham’s antiphon is on Mary’s proclamation, which is interesting, given that the title Magnificat is Latin for the Greek word that Luke’s gives Mary’s Song, that is better translated at “magnify.”  I haven’t been able to locate the ICET’s working documents on the Magnificat translation, so I cannot be sure why they made the switch from magnify to proclaim, but I’m certain they didn’t do it without careful consideration.

While I take great delight in the old version, “My soul doth magnify the Lord,” there seems to be something important about this newer version’s attention to proclamation.  Mary’s intent, it seems, isn’t simply to shine a light on the greatness of God so that she and Elizabeth can experience it, but rather, her ministry as the God bearer is to show forth the greatness of God for all the world to see.  By proclaiming that God has looked with favor on an unwed mother and that God is already in the process of turning the world upside down: casting down the mighty, scattering the proud, lifting up the lowly, and filling the hungry with good things; Mary is shouting from the rooftops the Good News that will come to completion in the life, death, and resurrection of her Son.

As we read and/or sing the Song of Mary this Sunday, mere hours before we light the Christ candle and rejoice in the birth of our Lord and King, it might be worthwhile to spend a few moments pondering the importance of proclamation, both in Mary’s Magnificat and in our own lives as disciples of the soon-to-be newborn King.

Despite my oft written about uneasiness with the season of Advent in its current 21st century Amercian incarnation, the third Sunday of Advent, often called Gaudete Sunday, is one of my favorites of the entire church year.  To start, we get the last remaining “Stir Up” prayer in the American Prayer Book.  More on that later this week.  The lessons for Advent 3, a day that is set aside for joy, are always interesting, even if John the Baptist’s doubt leads to some difficult preaching.  More on that later as well.  Beyond all that, the absolute best part of the Lectionary for Advent 3 is the opportunity to sing Betty Carr Pulkingham’s setting of the Magnificat.   Unfortunately, I can’t find a recording of it to share with you. 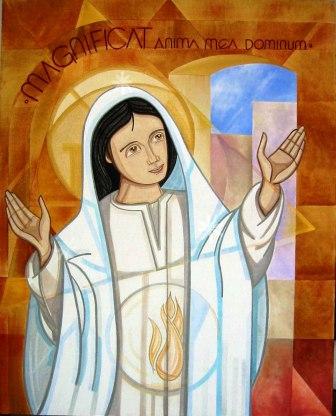 The setting is beautiful, but only because the words of Mary’s song are so powerful.  You’ll recall that this song comes from Luke’s Gospel account of the birth of Jesus.  Shortly after Mary is visited by the angel Gabriel and informed of her new identity as the theotokos, the Mother of God, Mary heads to the hill country to spend some time with her cousin Elizabeth.  Elizabeth was old and had long since given up hope of having a child, but she too is pregnant, miraculously, with the one who be known as John the Baptizer.  The unborn John leaps in his mother’s womb when he hears the voice of Mary.  Elizabeth offers the first Hail Mary, and in return, Mary sings her song.

“My soul proclaims the greatness of the Lord, my spirit rejoices in God my savior…”

What I find particularly striking this morning is the verb tense that Mary chooses.  My favorite Canticle, sung on one of my favorite Sundays, uses my favorite Greek tense: the aorist tense.  As I’ve written before, the Rev. Dr. Tony Lewis, my Greek professor, taught the aorist tense this way.  Occasionally, the refectory [a fancy word for cafeteria] will feature the sausage bar.  There are Kielbasas, hot dogs, Italian sausages, and the fiesta dog.  The aorist tense is like the fiesta dog, you eat it once, and its effects last forever.”

Listen to some of the things Mary puts in aorist tense: that is, it has already begun and is ongoing:

“He has mercy on those who fear him *
in every generation.
He has shown the strength of his arm, *
he has scattered the proud in their conceit.
He has cast down the mighty from their thrones, *
and has lifted up the lowly.
He has filled the hungry with good things, *
and the rich he has sent away empty.”

A brief study of the news will tell you that none of this seems true.  It was perhaps less true in Mary’s day and age, and yet she sang with confidence and hope that her being chosen to bear the Son of God meant that God’s plan for salvation was already underway.  The lowly were being lifted up. The hungry were being fed good things.  The social structures that oppressed people were being subverted.  The world was being turned right-side-up.

It may be really hard to see the truth of Mary’s promise.  We may scoff at her choice of the aorist tense, but that’s what Advent is all about.  We wait.  We watch.  We work.  We proclaim the greatness of the Lord who has already defeated selfishness, pride, oppression, and death

For all my ranting and raving about my dislike of the music during Advent, I’ve come to realize that I like a whole lot more of it than I originally thought.  Sure, O come, O come Emmanuel (H82, 56) is still by far my favorite, but I’ve added the likes of Comfort, comfort ye my people (H82, 67), On Jordan’s bank (H82, 76), Jack Noble White’s version of the First Song of Isaiah (Renew 122), and Betty Carr Pulkingham’s Magnificat (H82, S247.

You’ll note that of the five I’ve listed, three of them are based on Scripture, and while Psalm 42 and Isaiah 12 are significant texts, there is perhaps no more important scriptural song than that of Mary’s Song, the Magnificat.  We have two occasions to hear it sung (read is an option, but not a good one) this Sunday, either as a part of the Gospel lesson, or on its own, in the beautiful language of the Book of Common Prayer’s Canticle 15, the translation being given to us by the very stodgy sounding International Consultation on English Texts (Hatchett’s Commentary, 115), which also gave us the modern translations of our Creeds and the ecumenical Lord’s Prayer, which, as I once heard it said, is ecumenical only in that we’ve all agreed to never use it.

Mary’s Song holds a special place in my heart because of a gift given to my family by our dear friend Bill Murray.  Bill wrote this beautiful icon of Mary and Elizabeth in thanksgiving for the birth of FBC. (You can read reflections on the process of writing the icon at the link above). 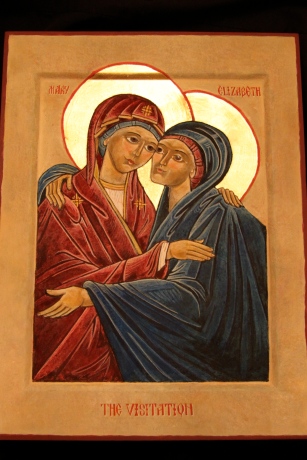 Mary’s Song is something of an expletive, sung in response to the pure joy she felt in the presence of her kinswoman, Elizabeth.  She had heard Elizabeth’s blessing, heard the story of the not-yet-born John the Baptist leaping in Elizabeth’s womb, and felt the loving embrace of the only other person who could understand what she was going through: carrying an unexpected child following a word from God, and Mary, overcome with emotion, shouted, sang, announced, “My soul proclaims the greatness of the Lord.”

She just couldn’t help it.  A song of joy and prophecy and probably not a little bit of fear just came forth from her soul.  In the same way my children dance when a song they like comes on, no matter where they are, Mary’s Song reminds us that following God’s will for our lives will lead to moments of unexpected joy, sometimes even in the midst of fear and hardship.

I don’t notice those moments of joy often enough, but as the countdown to Christmas dwindles, my prayer is that I’ll take the time to, like Mary, feel the joy that comes from knowing God’s love.