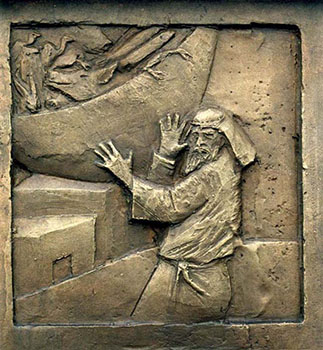 The story of Peter and the sheet from Acts 11 is an odd one, even by Biblical standards.  It has so many supernatural elements as to almost be absurd.  In fact, it seems to read more like a hagiography than a historical account.  There’s the vision Peter has while in a trance.  There’s the exact timing of the arrival of the men from Caesarea.  There’s the Holy Spirit descending upon Gentiles just as it had upon the first believers at the beginning.  If you were trying to write a story that would carry spiritual gravitas, you couldn’t have scripted one better.

Lost in all of the supernatural events, however, is the deeper truth which Peter is trying to articulate to the Apostles in Jerusalem – the radically inclusive nature of the Gospel message even for the Gentiles.  Mired about halfway through the fantastic story, just after the three men arrive at Joppa, Peter, now removed from his trance, receives another word from the Holy Spirit, “to go with them and not make distinction between them and us.”

That phrase has always caught my attention.  In digging into it a bit, I’ve realized that it is another example of English trying to convey in a lot of words what the original Greek handled with simple eloquence.  Other translations say “The Holy Spirit told me to go and not worry” (CEV).  “The Spirit bade me go with them, nothing doubting” (KJV). “The Spirit said to me: Go with them, without hesitation” (PNT).  The original Greek word means “to evaluate, consider, doubt.”

While the NRSV’s take, “make no distinction between them and us” works, I think it missed the mark on what Peter is really saying the Spirit said to him.  What seems to be happening here is an opportunity for Peter to trust God.  Not unlike that experience with Jesus walking across the water, through this vision and the call to Cornelius’ house, Peter is being invited to step way outside of his comfort zone.  As the story is relayed to us, it appears as though Peter’s actions have raised a lot of questions within the rest of the leadership of the Way.  He certainly knew, based on his faithful Jewish upbringing, that stepping into Cornelius’ house would forever change the game.

When the Spirit speaks to Peter as his stares, probably dumbfounded, into the faces of the three men from Caesarea, what I hear the Spirit saying is, “Without a doubt, go.”  “Go and share the Good News of Jesus Christ.  Go and fling open the gates of the Kingdom of Heaven.  Go and let the whole world know what God is up to.  Go and don’t doubt.  It isn’t for you to decide who is in and who is out.  Step out of the relative safety of this Jewish sect and watch what God has in store.”

Yes, it put Peter in an uncomfortable spot for a while, but because of his ability to trust, a skill that we know was hard earned in Peter, the Kingdom of God was opened to all and God was glorified.  I can’t help but wonder, what doubts are holding me back?  What is God calling us to do that will fling open the gates of the Kingdom?

One thought on “Without a Doubt”