One of the great joys that came in 2017 (and there were many – new church, new house, new town, etc.) was the opportunity to write two chapters for Acts to Action: The New Testament’s Guide to Evangelism and Mission.  Edited by two dear friends of mine, Susan Brown Snook and Adam Trambley, Acts to Action is a deep dive into the eight chapter of Acts as a blueprint for being the Church in a changing world.  I commend it to you. (Full Disclosure – I receive no personal financial gain from your purchasing this book from Forward Movement for you, your congregational leaders, family, and friends.) 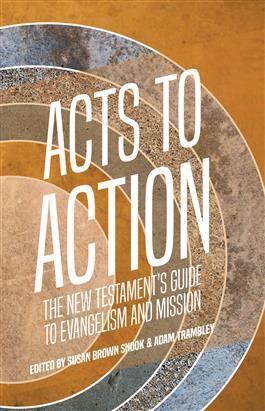 One of the chapters I was asked to write was about the Bible, and how we might use it to help facilitate mission and evangelism.  The central text was the story of Philip and the Ethiopian Eunuch, in which Philip, led by the Spirit, helped the Eunuch to understand what he was reading from the scroll of the prophet Isaiah.  As I wrote that chapter, what continuously came to mind is the opening line from Sunday’s lesson from Hebrews 4, “The word of God is living and active…”

There are two things I love about this phrase.  First, as I’ve discussed elsewhere (here and here), I think it cases the letter w properly as a lower case letter.  Jesus, the Second Person of the Trinity, is the Word of God, capital W.  The Bible, on the other hand, is the word of God, lower case w.  I can’t remember whether it was on the television or radio, but sometime in the last week, I happened upon a preacher who was talking about the absolute truth of the bible.  He suggested, with an eye toward liberal mainline Protestants, that some churches didn’t believe the bible to be absolutely true in everything it says.  Count me among those accused, but I’d argue for a bit of nuance, which isn’t the forte of television and radio preachers.  Saying that the Bible isn’t absolutely true, to my mind, means that it isn’t 100% factually accurate.  One need not look beyond the first two chapters of Genesis to see the two very different creation stories to know that the bible cannot and does not claim factual infallibility.  The bible is, however, 100% true in that it tells the very real story of God’s love for all of creation, and God’s desire to be in right relationship with humankind.  My friend the radio/television preacher was arguing for the book he was holding in his hand to be the Word of God, but I would suggest that only Jesus gets to carry that capital letter.

I’ve digressed, as usual.  What this post was supposed to be about was the titular phrase, “living and active.”  As I said, while writing that chapter, this phrase kept coming to mind.  Those who read the scriptures with regularity often note that they have found something new in their reading.  Rather than being a dry, old book that sits on a shelf, when you engage the bible, you’ll find that the Spirit is at work in and through the words on the page, ready to teach you something new, expand your horizons, or call you to a new and deeper understanding of God.

2 thoughts on “Living and Active”