I may be alone in this. It could be the result of my recent change in geography.  I’m hoping it isn’t a sign of the times.  In the past month, for the first time in my ordained life, I’ve become aware of two instances in which the efficacy of one’s baptism was questioned.  Both were baptized in the Dominical form: with water and in the name of the Father, Son, and Holy Spirit, which, at least according to my read of the Chicago-Lambeth Quadrilateral, is all that is needed for a baptism to be considered valid in our tradition.  Of course, those who are suggesting that age and mode matter above all else, don’t care much about William Reed Huntington’s attempt at church unity or what some papist rag wearing guys in purple shirts (probably a historical anachronism) voted on in Lambeth in 1888.  Realizing that, I turned to an old friend, Maxwell E. Johnson’s The Rites of Christian Initiation, which every clergy person should have on their bookshelves. 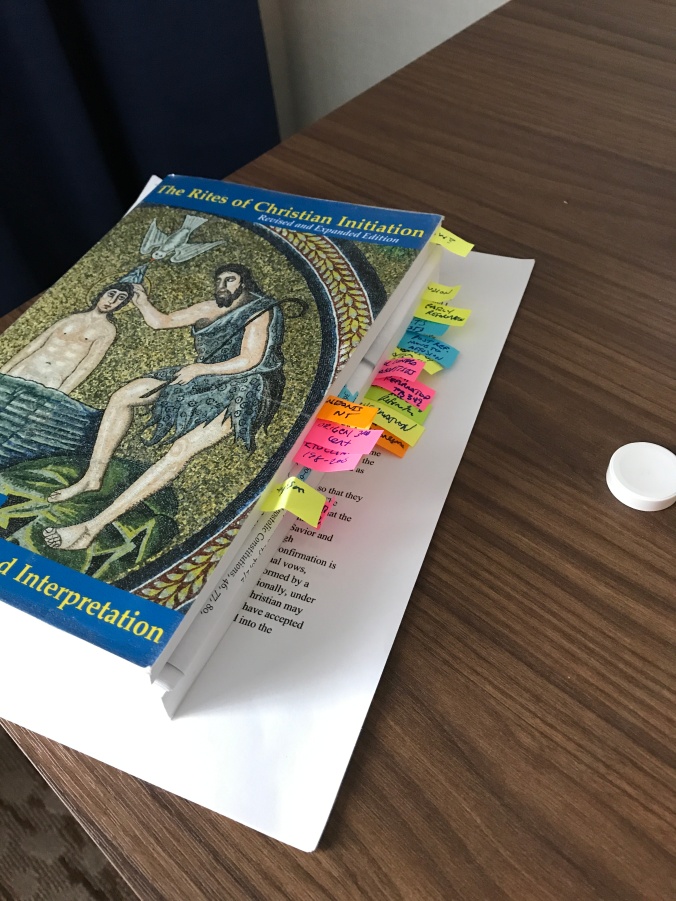 As you can see, I’ve been hard at work, crafting a good argument for why infant baptism by affusion should be considered just as valid as a “believer’s baptism” by submersion.  I do so, fully admitting that I am a fan of and would much prefer to see the latter become normative over the former which is how I was baptized as well as both of my children.  The crux of the question comes down to, as it always should in theological debate, the Bible.  What does our foundational document say about baptism?

The full argument is beyond the scope of what I can handle in a blog post, but suffice it to say that like most things that end up in a Scriptural debate, the waters are murky.  If you want to argue that only adults can be baptized and it should be done in clean, flowing water, the Baptism of John will get you pretty close (ignoring that the waters of the Jordan were considered ritually unclean (Johnson, 11)).  If you think that maybe younger children should be welcomed and the means of water is open to debate, the stories of entire households being baptized in Acts can be used to support your argument (ignoring the reality that just because something is not said to have not happened, doesn’t mean it did).  So, how are we to know for sure that a baptism in efficacious?

Turning again generally to the Bible, and more specifically Sunday’s NT lesson, my ongoing side in these debates is that we will know that God was present in Baptism because we see the signs of the Holy Spirit at work in the life of the baptized.  In the story of Jesus’ baptism, every account makes sure to mention the Holy Spirit descending upon him.  In various stories in Acts, we hear that the newly baptized are filled with the Spirit in the same way the 120 were on Pentecost.  In the prologue to 1 Thessalonians, again we are reminded that the surest sign of salvation is God’s Spirit at work.

For we know, brothers and sisters beloved by God, that he has chosen you, because our message of the gospel came to you not in word only, but also in power and in the Holy Spirit and with full conviction…

Those who argue that there is only one way for a baptism to be valid won’t be swayed by fancy arguments from a giant textbook, just as I won’t be swayed away from my belief that God is much bigger than any box we want to put God in based on “the Bible says it, so I believe it.”  I’m not sure that matters though.  What matters in the end is that when the signs of the Spirit are there, no one can deny God at work.  How do I know?  I’ve seen it in those baptized at 1 day, 1 month, 1 year, 10 years, 20 years, and beyond.