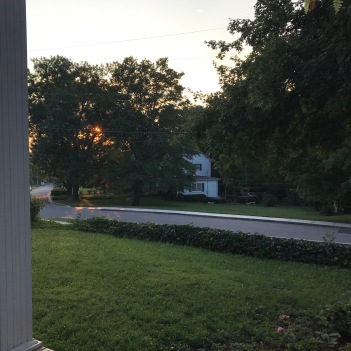 Shortly after 6am this morning, I sat down in a rocking chair on my front porch to sip my first cup of coffee of the day.  It is the first day of school here in Bowling Green, so everything had to be moved ahead of the slower paced summer schedule.  I noticed, if only for its lacking, that the sun was not yet over the trees.  What had been an overwhelming brightness over the past several weeks was replaced by the redness of the newly risen sun, just barely peeking through the trees.  It was cool, the street was quiet, and I thought to myself, “this is the calm before the storm.”

By the Roman time keeping standard of the 1st century, 6am is the end of the fourth watch, the time stamp given for this week’s Gospel lesson in the Greek version (and honestly most others outside of the NRSV).  After a night spent in prayer, Jesus set out to meet up with the wind battered disciples on a boat somewhere near the middle of the Sea of Galilee by walking across the water.

I note the time of day as the fourth watch because I think it helps add in the subtle drama of the story.  We don’t know what time of year it was, so we can’t be for sure when the sun rise would have occurred on that particular morning, but the sky most definitely starts to gain light toward the waning hours of the fourth watch.  Unlike Mark’s Gospel, where Jesus seems to teleport from one location to another, Matthew tells us that somewhere during the period between 3am and 6am, Jesus walked to meet his disciples.  It would have taken him some time to traverse the roughly four mile hike from the south-western shore to mid-lake.  As he walked, the sky began to wake.  First light came, and as the sun approached the horizon, the twilight grew until the figure on the water began to come into focus for the disciples.

It isn’t so much that the time of day really matters for preaching, except that it kind of does.  When we miss these details, the story loses some of its power because we are no longer able to put ourselves within it.  With the return to a fourth watch translation (and the requisite teaching required to help people know what that means), we can begin to imagine ourselves within the story.  Many have experienced the twilight of the morning.  We know what it is like as what was once darkness gives way to light and more and more things come into view.  Sometimes, all it takes is one small detail of subtle drama to allow us to experience more fully what the disciples were feeling, to understand the story more fully, and find our place in an ancient encounter with the Savior of the World.