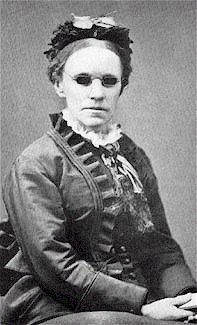 Blindness is everywhere I look today (bad pun #1).  On Wednesday mornings, SBC’s preschool has an 8:30 chapel service.  The lesson for this morning was an excerpt of Sunday’s Gospel lesson about the man born blind.  To illustrate that story, the School Director told the story of Fanny Crosby, a prolific poet and hymn writer who became blind at a very young age.  at age 8, Fanny wrote her first poems, which often focused on her condition.  She wrote,

Oh, what a happy soul I am,
although I cannot see!
I am resolved that in this world
Contented I will be.

How many blessings I enjoy
That other people don’t,
To weep and sigh because I’m blind
I cannot, and I won’t! (1)

As I settled in to the office this morning after chapel, I opened today’s Lent Madness match up, which has, of all people, Fanny Crosby! going up against  George Frideric Handel, who was himself blind by the time of his death at age 74.  I’m still debating whether to file a complaint against SBC’s school for creating a bias in today’s Lent Madness voting.

After all of that, I’ve gone back and reread Sunday’s Gospel lesson with fresh eyes (pardon the pun in poor taste) and am noticing the obvious that blindness isn’t about the physical condition of the man who has his sight restored by Jesus, but rather is the ongoing condition of most everyone else in this story.  The blindness of the disciples opens the story.  Seemingly right in front of this man who is blind, and not deaf, they ask Jesus, “What’s with this guy?  Did he sin or his parents?”  It continues with his neighbors, who after his healing, though nothing about his physical appearance has changed, can’t seem to recognize this man who for years they had seen and known as “the man born blind.”  The Pharisees get in on the act, unable to see God’s hand at work in this healing because is happened on the Sabbath and didn’t follow their closely defined idea of how things were supposed to work.  Finally, the man’s own parents seem blind to the fact that in protecting their own hides, they have thrown their own son under the bus.

As the story ends, Jesus confronts the blindness of the Pharisees.  He calls them out for their unwillingness to see and their stubborn rejection of anything that falls outside of the tunnel vision religion they have carefully crafted for their own well being.  This ongoing blindness is the most dangerous, and one that can easily creep into our own faith communities.  It is so easy to see only what we want to.  We can pat ourselves on the back for being such a friendly congregation and never notice how radically unwelcoming that makes us.  We can fret the ongoing decline of membership numbers and not see how God is still using your congregation to deepen relationships, care for the downtrodden, and reach out to those in need.  Blindness goes both ways, we can miss the good and the ill in our midst, but the way of God is the way of sight.  God’s Son came as a light shining in the darkness.  Will we choose to see everything the light has to offer?  Or are we content with the perceived safety of the lingering darkness?