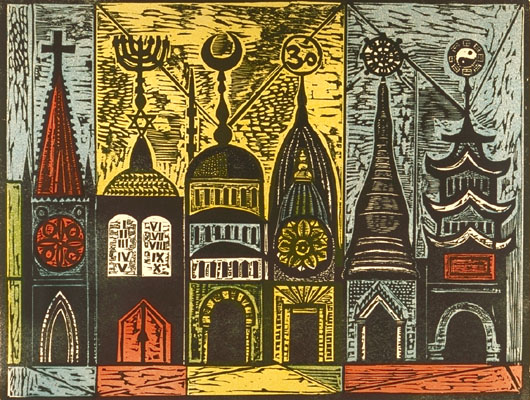 John’s Gospel message can be summed up in several different ways.  For many, the heart of the Johannine message is John 3:16, “For God so loved the world that he gave his only begotten son that any who believe in him may not perish, but have everlasting life.”  That’s a good one, and so is the very next one, “God did not send his son to condemn the world, but that the world through him might be saved.”  There are also the seven “I am” statements in which Jesus not-so-subtly declares himself by the unspeakable name of God.  Those are a pretty powerful witness to Jesus as well.  Others might look to Jesus’ statement mission in 10:10, “I came that they might have life, and have it abundantly.”  All good, I tell you, all good.

However, as I read the first Gospel lesson choice for Sunday, I was struck by another thematic highlight in John’s Gospel, the abiding place of God.  It begins in the Prologue with John’s famous verse, “The Word became flesh and dwelt among us.”  Or, as Eugene Peterson says it, “The Word became flesh and blood and moved into the neighborhood.”  That verb, to dwell/abide/move in, reappears in noun form twice in the fourteenth chapter.  The first time is in the famous funeral lesson line that is represented in the Irving Amen woodcut above: “In my Father’s house there are many mansions.”  Other translations say “dwelling places.”

It occurs again in Sunday’s Gospel lesson, as Jesus promised Judas (not Iscariot) and the rest of the disciples that God: Father, Son and (maybe) Holy Spirit will make make God’s abiding place alongside those who love Jesus and follow his commandment to love one another.  So it is that as Jesus prepares to leave his disciples and be enthroned on the cross as the King of kings, he assures them that his death won’t be the end of God’s plan to live in our neighborhood.  In fact, in Jesus’ death, resurrection, and ascension, God will make room for more than just the Son to abide among us, but for the fullness of the Triune God to abide with those who strive to be disciples of the Gospel of love.