I received this birthday card from my parents this year.  That such a card exists is pretty amusing, that it came to me the week of Epiphany 2c, when we hear the story of Jesus turning water into wine, is downright awesome sauce. 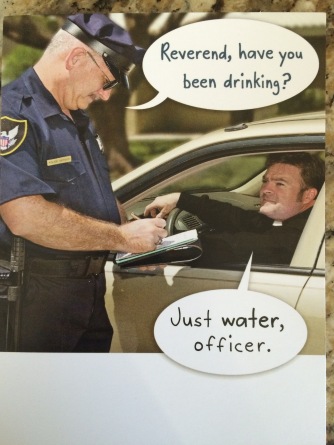 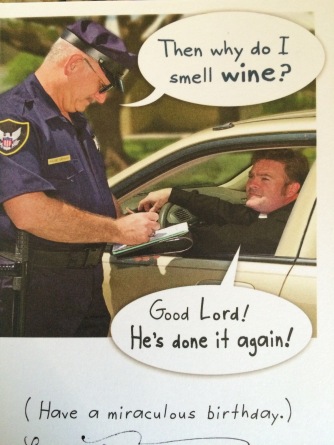 We can debate the humor of this card in a post-Heather Cook Episcopal Church, but that isn’t really my point this morning.  Instead, what I find interesting in the story of Jesus’ first sign is how it points not only to the power of Jesus and solidifies his disciples understanding of who he is and what he has come to do, but that it also serves as a sacramental sign of the extravagance of God.

Preachers who have done their homework will know that wedding feasts in ancient Israel were serious affairs: often lasting days on end.  Jesus and his disciples have been enjoying the party when Mary (who goes unnamed in John’s Gospel) informs him that the wine has run out.  Having attended a few events where the line lasted longer than the food or drink, I’ve seen what kind of embarrassment this can be.  Nobody wants to be known as the party thrower who didn’t have enough to serve his guests.

At first, Jesus is reluctant to do anything.  “It’s not my time,” he says to his mother, but I suspect he’s thinking, “these powers aren’t for parlor tricks.  The Second Person of the Trinity didn’t come to do magic and keep people drunk.”  And yet, seemingly motivated by his mother’s faith in him, Jesus performs his first sign by turning upwards of 180 gallons of water into wine.  That’s roughly 908 and a half bottles of wine!  As if that wasn’t extravagant enough, Jesus didn’t turn the water into Charles Shaw’s Four Buck Chuck, but the best wine that the party goers had tasted all night.

Do you want to know how much God loves you?  908.5 bottles of the finest wine worth.  And then some.  The extravagant love of God is poured out as a never-ending stream.  In his first miracle, Jesus shows to lengths to which God will go to make that love known to us.  May you come to experience the over-flowing, over-whelming love of God.

2 thoughts on “The Extravagance of God”