“You brood of vipers!”

“The axe is lying at the root of the tree.”

“The chaff he will burn with unquenchable fire.” 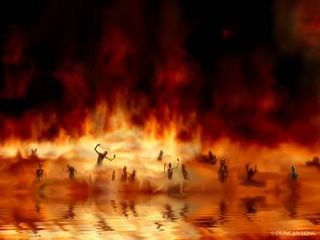 John the Baptist, like the prophets who had come before him, was not one to mince words.  He had a message to share.  As much as it was a message of hope, it was, first and foremost, a message of stark realism. God desires righteousness, human beings, both in the age of John the Baptist and today, fall woefully short of that ideal, and there are consequences when we fall short.

The crowd, Luke tells us, hears John’s message and realizing the error of their ways, asks for advice on how they should change their ways.  John’s answer is simple.  In fact, it is so simple as to be terrifyingly mundane.  He doesn’t tell them to fast for 40 days or to move to a cave in the wilderness or to give away everything they own.  Instead, he says “share,” “don’t cheat,” and “be satisfied.”

Wait… what?  Share, don’t cheat, and be satisfied?  That’s what Kingdom living looks like?  That’s, well, just so easy a child could do it.  Which is precisely John’s point. Kingdom living isn’t difficult, we just choose not to do it, which is why the punishment is so severe.

Kingdom living isn’t difficult, but imagine how different the world would be if everyone just followed John’s three simple rules: share, don’t cheat, and be satisfied.

One thought on “The Terrifyingly Mundane”