In the words of the Wu Tang Clan, “Cash Rules Everything Around Me, C.R.E.A.M, get the money, dolla, dolla bill y’all.”  In its original context, this is, of course, what the Parable of the Talents is all about.  A man is going on a trip and rather than letting his significant wealth sit idle while he’s gone, he gives it to three of his slaves, each according to their ability, in order that they might put it to good use.

These are not insignificant sums of money.  Depending on whether you subscribe to weights of measure or daily wage theories for what a talent was in Jesus’ day, we’re talking the modern day equivalent of $1.7M or $375K per Talent.  I’m a daily wage guy, since that’s what I’ve read most in the scholarship, so a talent equals 15 years worth of the average daily wage for a laborer.  In Foley, Alabama, that is roughly $375,000.  So to the first slave goes $1.875M, the second gets $750k, and the third, $375k.  Upon his return, the first gives his master back $3.75M, the second, $1.5M, and the third still has $375k.  That’s an overall ROI of over 87%!  The lesson, obviously, is to be wise stewards of the gifts that God has given for the upbuilding of the kingdom.

What I’ve found interesting this week is that clergy throughout the ages have been uncomfortable with the Wu Tang Clan’s CREAM philosophy.  Over and over again this parable has been used metaphorically to talk not about money, but rather about the natural skills and aptitudes with which God has blessed us.  It has happened so often and for so long that etymologically, the meaning of the English word “talent” comes from this exegetical slant on Matthew 25 (HT Kathryn Matthews).  Don’t believe me, here’s what Google says when you ask it for information on the etymology of talent. 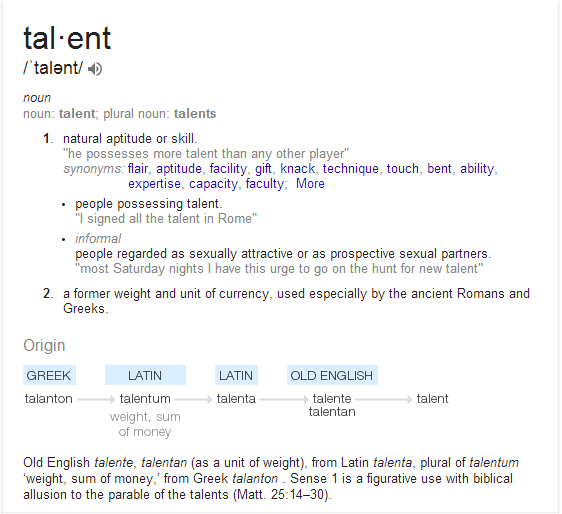 Of course this parable is about money, CREAM isn’t just for rap stars.  It is also about much more than, but if preachers are so afraid to talk about the money piece with their congregations as to create a new word usage in English, then we’ve got a problem that can’t be fixed by fancy word choice and dancing around the issues.  So as you prepare to preach this Sunday, in the midst of what is probably stewardship season, remember, dear reader, the wisdom of the Wu Tang Clan, “Cash Rules Everything Around Me, CREAM, get the money, dolla, dolla bill, y’all”